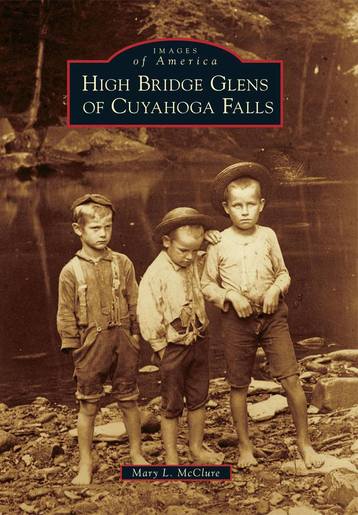 This is local author Mary L. McClure's book covering extensive history of the very same section of river the race is on. Learn what transpired more than 100 years ago when over 8000 visitors a day came to visit this river. History repeats itself, High Bridge Glens might not be what it was 100+ years ago, but we now have the Cuyahoga Falls Kayak Race. The race is bringing spectators from all over the East Coast right into the very spot where High Bridge Glens tourism once flourished.

Pick up her book here:
https://www.amazon.com/Bridge-Glens-Cuyahoga-Images-America/dp/0738593613/

See what she wrote specifically about the downtown area for the race course!


Today, as you kayak on the Cuyahoga River between Portage Trail and Anchor Rock in Cuyahoga Falls, you are traveling past the heart of the city’s downtown residential, shopping and restaurant districts.

However, if you had travelled this same route in the 1800s and early 1900s, you would have seen a much different vista.
During that era, this stretch of the river was dotted with dozens of manufacturing businesses – producing everything from paper, rivets, chairs, farm implements, sewer pipes, and more. In fact, in the early 1800s, this portion of Cuyahoga Falls was considered one of the busiest manufacturing centers in the state of Ohio.

Navigating this portion of river at that time would have been a trickier – if not, impossible – proposition, as many wooden (and later) concrete dams were built to generate power for mills and factories all along the Cuyahoga. According to one historical account, in 1881 one quarter-mile stretch of the river had no less than five dams.

Just north of where you put in is one reminder of the city’s proud manufacturing heritage. The brown brick building, which is today a restaurant, once served as the powerhouse for the Falls Hollow Staybolt Company.

Traveling further down river, passing underneath the Portage Trail bridge and then the Broad Boulevard bridge, you will notice a large hotel on your right. The hotel was built on the site of the former Vaughn Machinery company, which produced machinery and other equipment for the rubber, plastics and steel industries across the U.S.  Although the Vaughn plant (and its associated dam) is long gone, you can still see the hotel’s concrete overlook constructed on remains of the Vaughn power house.

After you pass through this stretch of river you will see a third bridge overhead – the Prospect Street observation bridge. You are now entering an area of the river that once featured one of northeast Ohio’s most popular Victorian-era amusement parks – High Bridge Glens and Caves. High Bridge Glens, which operated from 1879-1895, was known for its great natural beauty and its early roller coaster – believed to be one of the first in the United States. At the height of its popularity, the park attracted 10,000 visitors a day to Cuyahoga Falls during the summer.

If you had visited High Bridge Glens in its heyday, just beyond the bridge, on the right, you would have seen the park’s wooden, two-story dance pavilion and dining hall, as well as a wooden stairway leading from the top of the Glens to trails along the river. Just opposite those structures, on the left side of the river, you would (and still can) see a large sandstone cliff face known as the Weeping Cliffs – so-called because cracks in the rock enable water to drip down the cliff face. Further down the left side, you can see a hump-shaped hill, which marked the start of a picturesque path that was once known as the Grand Promenade.

At this point, there was once a metal suspension footbridge that connected the east and west sides of the park. Just south of the footbridge, on the right, was a small, hand-pulled ferry boat that carried visitors downstream.

Continuing on the left side of the river, the Grand Promenade led into the remains of a defunct enterprise known as the Chuckery. Circa the 1840s, Dr. Eliakim Crosby and investors had a plan to divert water from a portion of the Cuyahoga River in Cuyahoga Falls, and use it to power a new manufacturing center (Summit City) to be built downstream in Akron near what is today North Hill. Toward that end, they built a sandstone wall and dam at a triangular boulder known as Anchor Rock, and a channel to carry the water. Unfortunately, the enterprise failed to deliver on its potential, and the Chuckery race was later abandoned.

Stones from the Chuckery are still visible on the left side of the riverbank. This unique piece of local history is listed on the National Register of Historic Places.